View source
watch 01:25
Jurassic World: Dominion Dominates Fandom Wikis - The Loop
Do you like this video?
Play Sound
"Also... the Hidden? Couldn't that be something even you don't want to know?"The following content contains spoilers. Please proceed at your own risk.
"I'm sorry. I haven't created anything past this point yet."This article or section is a stub.

Wicked is a member of the Ostinato Musicians in The Caligula Effect.

Wicked's outfit consists of the Kishimai High School uniform, but heavily modified; she wears a flak jacket over the regular top, several buttons of the jacket (which has a heart print on the interior) are undone, and she also wears a pair of ripped-up pantyhose. Additionally, she has brown eyes with pink, heart-shaped pupils and long, messy brown hair.

As a result of the trauma she suffered during her abusive upbringing, Wicked has sociopathic tendencies that manifest in the form of an unbridled desire to destroy human relationships. She disguised this behavior, however, under a cheerful, calm, and kind facade. Aside from this seemingly harmless act, she has an affinity for explosives and uses them with reckless abandon. As a composer, Wicked crafts songs that ridicule and mock concepts such as love and friendship.

Like all characters, the SP cost for Wicked's skills decreases per phase. Additionally, some of her skills require a certain level or character episode progression to unlock: Munition Magician (Level 40), Dynamite Extradite (Level 45), and Emancipation Detonation (character episode completion) fall under this category. 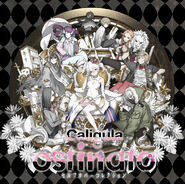 Wicked can be seen in the background of the Ostinato Musicians self-cover album.

Wicked holding explosives from the anime.

Wicked enjoying the thrill of battle from the anime.

Wicked's design in the anime.

The first page in the complete guidebook that details Wicked's boss fight.

The second page in the complete guidebook that details Wicked's boss fight.

Wicked with her fellow musicians, as seen in the complete guidebook.