Suzuna Kagura is a first-year student at Kishimai High School and a member of the Go-Home Club.

Suzuna has brown hair arranged into bangs to either side of her face and a bun, as well as a similarly-colored headband that is tucked behind her ears. She has brown eyes. She wears the school jacket and emblem, however, her undershirt has frilled edges on the top half of its placket and she wears a big green bow with white flower outlines on it. She also wears a long black knee-length skirt, which splits on her right side, as well as a black belt. She wears the school shoes with long black knee-length socks that have a single white stripe near their tops.

Her Catharsis Effect's weapon takes the appearance of a long grey-handled spear with a white arrowhead-like shape. The top part of the spear's handle is black, as well as the small spear connecting the two parts of the spear's head. The end of the spear has a white attachment that resembles a flower bud on the end of it. The hole in the middle has a flower symbol imposed inside it. Her Catharsis Effect item is a large witch's hat, the brim large enough to hide Suzuna's eyes. It has an anchor-like accessory at its tip, a small silver bell mounted on the brim, and a large white flower on its top. Unlike the other Catharsis Effects, there is no blackened skin/outfit modification that occurs.

Suzuna is a shy, soft-spoken girl. In conversation, she often stutters, especially when flustered. However, she cares a lot for her friends and when they are threatened, she can grow incredibly determined. As shown in the anime, she can also be quite talkative to her friends and talking about her interests. Whenever Suzuna is excited or scared, she can get incredibly loud.

In reality, Suzuna was a high-school student who was lonely. All her middle school friends had gone to a different school, and she was bullied for her interests in reading and singing. She came to Mobius, and her entire class was NPC copies of old friends from middle school. She joins the Go-Home Club before the protagonist, so that she can return to reality.

Suzuna's character episodes are centered around her working up the courage to ask the various members of the club to lunch, revealing her trauma when Kotaro Tomoe rejects her invitation due to awkwardness.

Suzuna ends up developing an unhealthy fixation on the protagonist, saying that they'll be together forever and that they'll help her. At the end of her character episodes, the protagonist can either encourage or talk her out of this fixation, both of them ending with her unlocking her ultimate skill.

Suzuna is one of the more well-rounded characters in the party, being able to perform aerial attacks, break guards, and play amazing support (being one of the few units who can revive party members, the other two being Kotono Kashiwaba and Ayana Amamoto) all while having the wide range of area attacks to do so. The only problem is that since she only has Rush Skills, she must always approach the enemy with her weak HP and Defense, so most of the team setup and combos must keep this in mind, although her Evasion stat somewhat makes up for this. With the right setup and while having a good Accuracy and Critical stat, once a combo starts going, Suzuna can become a destructive force. Here are her Catharsis Effect Skills and Support Skills. 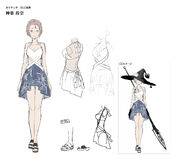