Shogo Satake is a 3rd year high school student and the former president of the Go-Home Club.

Shogo wears the Kishimai High-School uniform with a few modifications. He has a vest underneath his blazer, and a black and gold patterned shirt under there. His collar is decked out with flowers, and he has two-toned hair that is white on one side and black on the other.

His Catharsis Effect makes broken shackles appear on his wrists and turns his hands black. His left sleeve vanishes, and his arm is revealed, which has turned as black as his hands.

Shogo is a very laid-back person, and he tends to go with the flow most of the time. However, he has taken up the big brother role to the rest of the Go-Home Club, and was the President before he handed the role off to the Protagonist. He is incredibly responsible, but refuses to accept that.

He seems to be gloomy, and has a viceral negative reaction to Thorn's music, and becomes nauseous almost instantly. However, he can also get desperate and angry if he's pushed to the edge far enough.

Thirteen years prior to the events of the game, Shogo was a high-school student who was friends with Thorn and Ichika Saotome. Everything was going great, until Ichika sent Shogo a disturbing text message.

Shogo, in his nervousness, replied that he would and then backed out without talking to her. Ichika killed herself alone that night. Thorn blamed him for this, and kept asking himself why she didn't ask him to die with her instead of Shogo.

He entered Mobius and at first, he didn't care about living in a virtual utopia. It was the same to him. Until he met Thorn again, this time wearing the face of Ichika. To him, it was a nightmare come to life. Ichika was leaping off buildings in front of him every day. This is when he founded the Go-Home Club, not because he cared about reality, but because he couldn't live with the reminder of Ichika wherever he went.

During his character episodes, he meets Chika, a girl whose phone he broke on accident. Chika insists he go out with her on a date so she can tell her friends she has a good boyfriend, and ends up catching feelings for him. Shogo rejects her on the spot, and then he reveals that he doesn't believe he deserves to love after Ichika.

Chika then attempts to kill herself by throwing herself off Landmark Tower, but Shogo, the protagonist, and Aria stop her. Shogo then breaks off their friendship, since he is thirty and she is fifteen, but he says to her that if she ever again feels like she needs to end it all, to text him. He says that he'll stop her, no matter what.

Shogo's character episodes end with him being ready to return to reality, and re-enter society, with the protagonist helping him every step of the way.

Normal: Founder and big brother of the Go-Home Club. He may seem lethargic, but he's determined to find a way to get back to the real world, no matter the cost. While he's known for his cool demeanor, he has a morbid reason for returning to reality.

Deep Dive: Deeply regrets abandoning a loved one. Can't face the past, which haunts him every day.

Secret: Lost all hope after a girl's Suicide. Can't make important decisions himself.

True Personality: Devastated by feelings of loss and guilt for the death of his dear friend, he wanted to put an end to his suffering.

Shogo parallels Thorn, the leader of the Ostinato Musicians. They share their trauma, and they reacted in wildly different ways. Thorn reacted to Ichika's suicide through obsession and madness, choosing to throw himself away to become her in Mobius, believing that if she couldn't be brought back to life, that becoming her would be the next best thing. Meanwhile, Shogo froze. His grief destroyed his life, and led him to being a thirty-year old NEET. His guilt over not dying with Ichika sent his life on the worst possible track.

This parallel leads Thorn to absolutely detest Shogo with every fiber of his being, while Shogo's guilt sends him spiraling every time he sees Thorn wearing Ichika's face. He cannot listen to Thorn's music because the melody and lyrics speaking of fake happiness and not being able to see the end sends him into a shame spiral that almost ends up in him vomiting.

Shogo is a very powerful unit when paired with party members that are able to launch enemies being able to deal massive damage with a variety of skills with his impressive Attack, Accuracy, and Critical stats. The downside is that most of his skills have a long Cast Time and long Cooldown, meaning he'll have to take advantage of the Explosive Loader and Misery Skills to react faster. Other than that, having high stats and the ability to easily inflict Risk Up without setup on enemies makes him a huge threat. Here are his Catharsis Effect Skills and Support Skills. 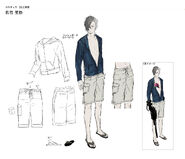