The protagonist of The Caligula Effect is a second-year student at Kishimai High School and, like many others in Mobius, entered it to escape the harshness of reality.

Following their realization of Mobius not being the real world and encountering μ and Aria, they join Shogo Satake and eventually replace him as President of the Go-Home Club.

The male protagonist is a young man with neat black hair, bangs mostly curved off to the left. He has gray eyes, and like most of the people in Mobius, wears the school academy uniform, though slightly altered in that he wears it open with a red flower pendant or tie around the collar of his shirt. This pendant is the same flower as their Catharsis Effect's flowers.

The female protagonist, much like her male counterpart, wears a modified version of the school uniform and wears it open with the same ribbon/tie/pendant around her neck. However, her shirt is colored white and wears suspenders over her shoulders. She has short brown hair and gray eyes.

As the Ostinato Musician Lucid, their appearance changes drastically. Their face is masked by a black skull, similar to a Digihead, and is dressed in a black coat with a scarf and pants, along with a black fedora hat. The scarf has several "X's" printed on it, with only a single "X" on the right side. Strangely, their torso is completely invisible and shows the red interior of their coat. It is also shown in their in-game introduction cutscene that their entire body is invisible except for their head, and it is a characteristic many characters comment on in-game. Depending on the angle of the camera in-game, faint outlines of a skeleton are visible in the chest area. The interior of the coat has a silver design of a rose. Connected to their pants are white suspenders that criss-cross over each other but don't reach up to their shoulders. Two white straps also hang down from their waistline. The coat has a gold cross pinned to the left side, where the emblem of Kishimai Academy would be. Curiously, in Lucid's portrait and artwork, the skull is incomplete with several holes and a smokey appearance, but in-game cutscenes and model show the head is complete and lacks any holes or smoke.

Regardless of gender, the protagonists' Catharsis Effects are relatively the same. It takes the appearance of two gun-like shapes, with two extra protrusions on the top and bottom, as well as several connecting rods near the front of the guns. The protagonists' arms will be blackened up to the forearms and the Catharsis Effect ends at the sleeves; the male protagonist's collar also exhibits this effect. In-game, these guns have some sort of flower sigil on their sides in white, and also exhibit a red vein-like appearance on them.

As a Musician, Lucid will lack the classic Catharsis Effect spike, flowers, or outfit adjustment, but their weapons remain the same. Their gun models will also lack the flower sigil visible on the protagonist's guns.

The protagonist is usually silent, thereby allowing the player to depict how they can be portrayed in the game. Like most denizens of Mobius, they entered because they felt as if they no longer had a place in the real world or simply didn't belong there. When first introduced, they are naturally stunned upon seeing a classmate who should have graduated already being introduced as a first-year student and realize that there is something wrong with Mobius.

A defining trait of the protagonist is that, like the other members of the Go-Home Club, they are willing to return to the real world, despite having suffered from circumstances that led them there, showcasing a resolve to face this trauma head-on. However, in Overdose, it is possible for this resolve to falter when questioned on it by Thorn, thus leading to their eventual betrayal.

The protagonist's life before entering Mobius is relatively unknown, though during the process in which they awaken to their Catharsis Effect for the first time, there are various choices for the player to decide. Among those is a dark secret that caused them to be judged harshly and wanted to escape from the criticism, an event to where they wanted to forget what happened but were unable to, or a combination of the two.

The Protagonist, unlike their sequel counterpart, has a parallel in Kensuke Hibiki. This parallel is very evident in Overdose and the anime. Kensuke and the Protagonist have both been aligned with the Go-Home Club and Ostinato Musicians at some point in time, and are both traitors, and in the anime, Ritsu Shikishima is a talented adult who has massive social anxiety, while Kensuke is an untalented minor who is scared of the future. They were both initially hesitant but went back to reality at the end.

This parallel makes them intrigue each other. Kensuke joined the Go-Home Club because of the protagonist, and he tends to question them about whether they truly want to go home.

However, in the Musician Ending, this parallel makes Kensuke detest the Protagonist. At this point, they have fully switched sides. Lucid is a musician, and Kensuke is a Go-Home Club member. The president and Kagi-P are no more. Kensuke remarks that he never expected this, and he goes all-out against Lucid alongside the rest of the Go-Home Club, only to lose and die.

The Protagonist/Lucid is by far the most versatile unit in the game. To be able to break shields, counter Melee and Ranged attacks fairly quickly and have a number of multi-hitting attacks to keep enemies in the air for combo potential means they have what it takes to adapt in battle depending on the team setup. Along with being able to greatly recover HP and get rid of any debuffs is a big plus too. Do note that even though Lucid is the Musician counterpart of the Protagonist, they share the same skillset, the only difference is the name of their Overdose Skill. Here are their Catharsis Effect Skills and Support Skills.

Promotional artwork of the male protagonist for Overdose 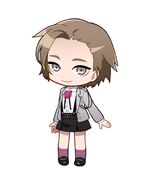 Chibi artwork of the female protagonist 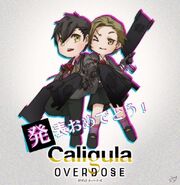 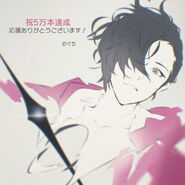 Thank you message for 50,000 sold copies, by Oguchi 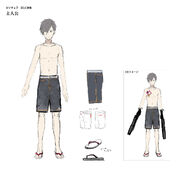