Mirei wears black high heels with a miniature shackle attached to one of her ankles. She also wears a white and black breast covering and black skirt, which are both covered by a red cape trimmed with thick white fur. Mirei also wears long black gloves lined with white fur.

Like all characters, the SP cost for Mirei's skills decreases per phase. Additionally, some of her skills require a certain level or character episode progression to unlock: Bellini (Level 40), Matador (Level 42), and Rusty Nail (character episode completion) fall under this category. 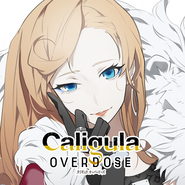 A series of headshots of Mirei from the Caligula Effect anime.