Mifue Shinohara is a first-year student at Kishimai High School and a member of the Go-Home Club.

Mifue has short brown hair and large brown eyes. She is the second shortest in the Go-Home Club, with Naruko being the first. Notably, she seems very skinny compared to her other female members, which relates to her purpose for coming to Mobius.

Mifue wears a modified version of the school outfit, with a longer black-striped skirt and black leggings. She also wears her dress shirt with the first button unbuttoned. Around her neck is some sort of pendant with a metal emblem on it. Tied under her shirt collar is a dark green ribbon. The sleeves under her jacket are black, with flower designs matching her Catharsis Effect flowers on them.

Her Catharsis Effect weapon is a long hammer, similar to a croquet mallet. On its side, closer to the end, is a small flower symbol. The end of the hammer also has a four-point star, while the other side is flat. Her right hand is blackened, with her outfit similarly shredded to that point.

Her Catharsis Effect item is a large segmented mask similar to a knight's bevor. The mask covers her mouth, nose, neck, and spreads out to her shoulders and sternum. This mask has a large design on the front, where her mouth is, as well as several lines leading down to the second part. With the Catharsis Effect active, Mifue's shirt is unbuttoned further, revealing a purple bra. This also shreds her outfit at the neck, shoulders, and collar.

It is first shown that Mifue has a very tomboyish personality. She's shown to be easily irritated, annoyed and angered. She also has a strong love of food and eating and enjoys having good meals, however despite this she is also extremely insecure about her figure and weight. This insecurity ended up turning into a severe phobia of becoming fat and overweight, to the point that she admitted to starving herself until she was hospitalized in the real world.

In the real world when she was young, she was constantly teased by her classmates about her mothers large figure and weight, with them even teasing her that she may become fat like her mother in the future, this planted and eventually caused her to develop a phobia of food and eating and giving her deep insecurities regarding her figure and weight, this caused her to outright refuse to eat, choosing to starve herself to stay thin which then weakened her body to the point that it landed her in the hospital where she remained until she was contacted by µ and was brought to Mobius.

Mifue is one of the few technical character that relies heavily on what the enemy's Risk is at. The more Risk the enemy has, the better she can perform and trigger a number of useful skills from it. Aside from having a similar Personality stat chart to Kotaro with minor differences such as slightly better Accuracy, a number of Mifue's skills have the ability to increase an enemy's Risk level by 1 instantly (this changes to filling up the Risk gauge from 1 level to either halfway or 3/4th of the gauge when fighting bosses). She can even support the whole party by granting everyone increased Attack and casting HP regeneration making her an excellent party member for strong support and if you're trying to setup for Risk Break to deal massive damage. Here are her Catharsis Effect Skills and Support Skills. 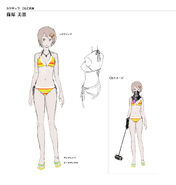