Caligula Wiki
Register
Don't have an account?
Sign In
Advertisement
in: Pages with an unnecessary ((Ruby)) transclusion, Characters, Go-Home Club

Kiriko has a short, blonde bob and brown eyes. She wears a long pink shirt and a short pink skirt underneath it. She wears the Tatefushi Academy blazer over her shirt, and has pink and white sneakers.

With her Catharsis Effect, she adds a headband that extends down to her mid-back and has a sheath tied to her stomach.

Kiriko acts as the big sister of the second-generation Go-Home Club. She is very responsible, though she seems to hate this distinction. She believes in deciding how she lives before anyone else does.

Kiriko was an idol known as Momona Kurahashi back in reality. When she made it big, her entire life was suddenly twisted and she lived high, ruling the music industry and the screen.

However, she didn’t enjoy this in the slightest. The idol industry controlled every aspect of her life, and she hated this with a burning passion. She was even forced to keep a certain hairstyle, long black hair. She states in a WIRE conversation that this is why she did the short, blonde hairstyle, because it was the exact opposite of how she had her hair in reality.

In Redo, she lived as a normal student, a troublemaker known as the Golden Wolf and Golden Gorilla. She’s incredibly antagonistic to Shota Tsurumaki due to this, as he is a stickler for the rules.

She awakens to her Catharsis Effect during the Pandora arc, when Pandora attempts to take her hostage and takes Shota instead when he throws himself in front of her.

At the end of this arc, it’s revealed that she was Momona Kurahashi, to the immense surprise of Gin Noto and Sasara Amiki, who were both fans of her in reality.

Kiriko wanted to leave that all behind, and Pandora dredged that up, which brought them into conflict. Especially when the club refuses to give her up to Pandora.

Throughout Kiriko’s character episodes, you learn that she abhors the responsibility that the club has placed on her, and just wishes to be free. Once you hit her deep-dive, she breaks down and just says she wishes that everyone would leave her be.

Eventually, X manages to download some items from her visual subroutines, showing Kiriko smiling with the club. This makes her realize that she does in fact enjoy the big-sister role and that it’s different from the pressures of being an idol. She ends up realizing that while she couldn’t be an idol to the world, she could still be an idol to her friends and family.

Kiriko parallels Pandora. Pandora hates idols because her favorite idol, Hikaru Hanamaki (Also known as Kaoru Uno), had an affair with a fan and betrayed her trust because he played up his availability to sell more CDs. Meanwhile, Kiriko was formerly an idol who left the industry after she cracked under the pressure.

This parallel makes them antagonistic to each other for most of the game, Pandora detesting Kiriko for being an idol and Kiriko realizing Pandora’s an entitled fan.

However, near the end of the game, Pandora ends up helping Kiriko, Niko, and the protagonist, and her phantom near the game’s end says that while she doesn’t like Kiriko, she’s glad she met her.

“Don’t take it personally if I leave you on read.”

A girl marked by her distinctively short hair, dyed entirely blonde. Though her appearance and cynical wit often deter people, she is the most sensible member of the Go-Home Club. Despite her courage and sharp mind, she hates being liable for others and is averse to leadership.

An ex-idol by the stage name of Momona Kurahashi. After debuting at 12, she was a top idol for ten years before she grew sick of it, opting to retire at the peak of her fame. The industry resisted, and by the time she fought her way out, the mental damage had taken its toll.

Kiriko’s combat style is wildly similar to Izuru Minezawa’s, where she focuses on risk-based offense. However, while Izuru cannot raise risk on his own and requires backup, Kiriko has many opportunities to raise it. She synergizes well with Shota Tsurumaki and the Protagonist, who have Blindside and Dreadnaught respectively to raise risk quickly. 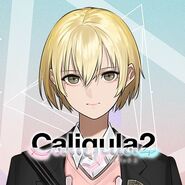 Official cafe collaboration for The Caligula Effect 2, featuring a drink inspired by Kiriko. 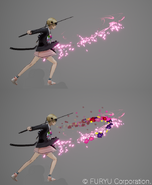 Official artwork by Historia counting down 5 days until the release of The Caligula Effect 2.
Community content is available under CC-BY-SA unless otherwise noted.
Advertisement