Izuru Minezawa is a second-year student who has been trapped in Mobius for a year and knows about the true nature of the virtual world. After he is rescued from Shonen-Doll's library, he joins the Go-Home Club.

Izuru has medium-length blond hair that frames his face, as well as stern gray eyes. He wears a modified version of the school uniform; underneath the blazer he wears a cream-colored sweater with gold buttons, and under that he wears a black turtleneck. Over his uniform he wears a long black coat with a fur collar. The inside of the coat is a dark maroon or purple, with stylized designs of his Catharsis Effect's flowers in red, white, and blue.

His Catharsis Effect's weapon takes the form of a long katana-like sword with a black handle and silver guard. His skin blackens up to the wrist on his right hand, which is the hand he wields his sword with. His Catharsis Effect item is a mask that covers the left side of his face. In the illustration, the mask has flower designs reminiscent of the ones inside his coat, as well as various white spikes and protrusions and what looks to be a jaw piece. However, the model simply has a rounded dome-like helmet appearance and lacks the flower designs or visible protrusions.

Izuru is a very individualistic and detached person, preferring to do things on his own wherever he can. His cool and aloof nature makes him very popular among Mobius' denizens. However, his emotional detachment also makes it hard for other people to connect to him, as shown with his stoicism regarding Shogo's attempts to recruit him.

He's also shown a somewhat crazed side to himself, as he admitted to scarring his own face in the real world; later, when trapped in Mobius, he attempted to do so again multiple times with him proudly telling others that the scars were the first thing he obtained all on his own without anyone's giving it to him or helping him, further showing his intense desire to obtain independence.

It's implied that he is stressed by females, as most of them always after him due his face. Regardless whether the girls has romantic interest or not (as with the jewelry shop owner), Izuru would quickly go away from them due his long time experiences.

Izuru's mother was very controlling. She wanted him to follow in her footsteps and become a violinist, and to that point controlled everything he did. This caused him to regularly self-harm, as it was one thing he could control. He sees these scars as a “badge of honor”, a sign of his independence.

At some point, he was diagnosed with a mental illness, schizoid personality disorder and as such likens himself to a malfunctioning robot. Emotions are hard for him to express and feel due to the sheer control that was put on him throughout his life.

In Mobius, he was fully aware of it not being real, but refused to join the Go-Home Club because he believed it was better to work alone. Shogo Satake made multiple attempts to get him to join the club, but he was rejected every time.

However, Izuru does end up joining the club after the Shonen-Doll arc, because he sees that they took down Shonen-Doll and wants the power to fight. He awakens during the Mirei arc, after saying that he doesn’t believe he’ll be able to awaken to a Catharsis Effect since he believes he’s incapable of an emotional swing. Digiheads soon attack, and Izuru almost has a breakdown over how powerless he is, and he awakens to his blade. Aria becomes concerned after the battle, but she questions herself when there isn’t even a scratch on Izuru’s face after getting hit directly there.

His Character Episodes center around him attempting to become independent, and failing at it. Aria tests him by bringing him to different places, like stores and restaurants, where he’ll have to complete a certain task, like ordering a meal or picking out an outfit. She and the Protagonist soon bring him to solo Karaoke, where some girls begin to harass him because they wish to go out with him. He soon breaks down and shatters a bottle, using the shards to cut his face. The girls run off, proclaiming that he’s crazy, and they return to the clubroom.

Izuru’s deep dive begins soon after, where he reveals his trauma. µ mistakenly believed that he wanted to get rid of the scars on his face, but to Izuru, those scars are the only things he has that are truly his. It’s why he’s so desperate to return to reality.

He soon learns that he can’t survive in society by only relying on himself, and that it’s okay to rely on other people. The protagonist tells Izuru that they were friends already, and he moves on, ready to return to reality with the club by his side.

Izuru parallels Ike-P. Izuru was a rich kid with good looks that had everything Ike-P ever wanted, while Ike-P worked for everything he have, which Izuru is jealous of. They each wished for what the other had, because to them, their lives have been a curse.

This parallel makes Ike-P antagonistic to Izuru at first, while Izuru admires Ike-P. After Izuru shows Ike-P his real face, this begins to pave the way for an understanding between the two of them.

At the end of Ike-P’s character episodes, Ike-P ends up respecting Izuru rather than detesting him, and they end up understanding each other.

Normal: A guy with a cold, indifferent disposition. Prefers solitude to avoid ignominious situations. A bona-fide pretty boy, he’s virtually a celebrity within Mobius. However, he prefers to not have any friends.

Deep Dive: His emotions have been repressed by excessive meddling from relatives. He is unable to express himself well.

Secret: The self-inflicted scars on his face represent his pride.

True Personality: Absolutely hates it when people get in his way, disturbing his sense of independence.

Izuru’s personality is very similar to Suzuna, just having a better HP stat but worse Defense compared to her. Gameplay-wise, however, Izuru's personality translates even in battle, where he works best alone given how his Skills trigger continuously into another and able to pull off his own combos if certain conditions are met (though he'll still need some help depending on the enemy's Risk Level) compared to Suzuna where she needs the help and setup. This will make Izuru apply a lot of pressure since the Skills he'll trigger in combos are Skills you can manually select minus one Skill, meaning he can safely conserve SP and still keep on attacking the enemy assuming the right conditions have been met. Otherwise, he's a pretty straightforward character that synergizes well with anyone, but mostly Mifue and Naruko due to their risk-rasing skills like Lame Impact and ε=(o*° -°)o Wham!! 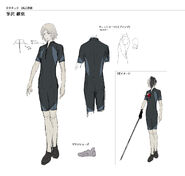