What's on your mind?

Okay, so clearly the TCE:O and the TCE2 lyrics are using two wildly different forms, and I was thinking we should probably standardize it?

Pros of the TCE songs: Keeps everything together on one page, uses a special section

Cons: Doesn’t have a template already made, people were copying and pasting it.

Pros of the TCE2 one: Looks very nice, has separate sections, has a template built already

Cons: And this one is my major issue with the TCE2 lyrics: It’s awkward as hell on Mobile. The attached photo shows what it looks like on my phone, the tabs don’t show up and it’s just a line of all three in a row which makes it super hard to compare.

I personally prefer the TCE:O one for that specific reason, just because I pretty much exclusively use Mobile and it’s impossible for me to use. What do you guys think? 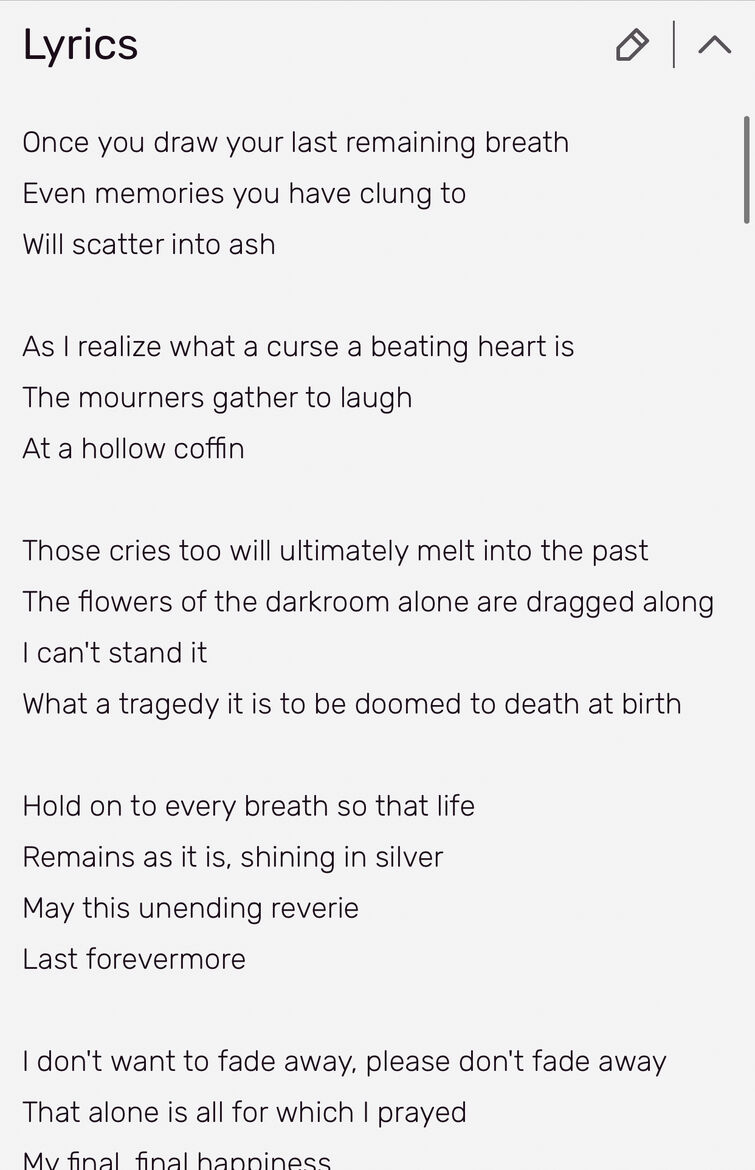 Can someone please tell me if there was some unspoken agreement to keep their traumas labeled differently? Because it keeps getting changed, and I had another editor call me a transphobe because I changed her page back to transvestism. I agree that it’s an outdated term, but it’s what the game uses!

And if the game didn’t specifically use Heterophobia and Transvestism, I’d agree that the terms were wrong. But the wiki is meant for accuracy, and that section is specifically for what the trauma is labeled as.

Listen, if there’s a common consensus as to what we should use, it’ll save us a hell of a lot of issues in the long run. Can we just please talk?

This is in the realm of pure speculation: and so a discussion post rather an editing of Gin's page itself.

The theme of Gin's catharsis skills seem to be a mystery, other than being english spelled out using katakana. Sasara's skills are based off old idioms, Kiriko's are in japanese and seem to be phrases that would be in a samurai movie.

So what's my theory of Gin's skills? Gin is known to be a fan of western superheroes. If you try and connect his skills to that of current super heroes, you can see some connections that don't seem like that much of a stretch:

Note how all of these are all from Marvel, and also had recent movie appearances. The more astute of readers may notice that I have left out two skills: Tall Spark and Dhampir Rave.

Tall Spark's original name is トールスパク, rom. tooru supaku. Although we pronounce it a slightly different way, "tooru" is another way of pronouncing the name of the norse god, Thor. (proof: https://ja.wikipedia.org/wiki/%E3%83%88%E3%83%BC%E3%83%AB?oldid=42635344) Thor happens to also be a superhero in a marvel movie, so this seems highly plausible. This means that the proper translation for this skill is Thor Spark. I do not blame the translators for missing this reference since it was also difficult for me to understand his skill naming scheme.

Dhampir rave, being the ultimate skill for Gin, is in spoiler territory. I warned you.

Dhampir Rave does not have a specific character named after it. There is one Marvel character, Blade, who is a Dhampir but is not called that. It's less of an obvious connection than the other skills, so i looked deeper.

The Dhampir is noted to be a half-human, half-vampire creature, having the skills and abilities of both halves. ref: https://en.wikipedia.org/wiki/Dhampir

When compared to the rest of the skills, which are all superheroes. Gin's ultimate skill is one named after someone who is half superhuman and yet not. This matches his character development in his deep dives. His obsession with superheroes is a stand representation of what he thinks manliness is supposed to be, what with the obsession with protecting other people and all. After coming to terms of who he is, he's not even a superhero at this point. He realizes he does not want to be a superhero, or only a man to realize his self identity. Both masculine and feminine aspects, superhuman and human, are a part of who he is and what makes him himself.

I wrote this down since I don't think anybody has written in depth about this, but I thought it added such an interesting depth to an already interesting character.

Okay. Hear me out.

They’re only on the TCE pages, the TCE2 pages haven’t even pretended to start them, and on the TCE pages they’re barely filled out. It seems like a massive undertaking when half the pages are still missing a history section, and I’ve never seen a wiki do this before.

Especially since the story sections specifically talk about what that character did, and the only truly notable things would be during the Musician’s own arc/The Go-Home Club Member’s Parallel arc.

It just seems far too excessive, especially when half the pages aren’t filled out with literal basic information like histories and appearance, and the process is incredibly slow-going because not many people work on this wiki for obvious reasons.

Maybe a page specifically just for story would work if we want to keep the information on the wiki in some capacity? Like a page that talks about each arc and what the central GHC Member and Musician did in different sections, like Kensuke/Prez, Sweet-P/Mifue, Ayana/Stork, Sasara/Machina, Kiriko/Pandora, Gin/MU-kun, etc…

It just seems to make the pages clunkier and messier, especially when they’re barely filled at all. Thoughts?

I'd like to get a read on people's opinions on merging Wicked's page with her alias. I am avoiding saying the other name since this is going on the discussion main page. However, both pages have the spoiler on the infobox so this isn't an issue. Which comes to my point: why are the two pages separated if the spoiler is there anyway? For simplicity's sake, this is just related to ce1/overdose.

Issue: Aside from being a useless spoiler deterrant, it also causes information to be redundant, or have information split across that both pages are missing significant information

Proposal: We should merge the two pages (preferably so Wicked redirects to the alias, since you see Wicked's design last).

* "Having it be a redirect is a spoiler too!" - You'll need to remove Wicked's profile image as well if things will stay like this, as her entire design is a spoiler. Both methods will be spoiling in different ways.

* "Will this break a lot of links?" - The other page will redirect to the remaining page, so it should be fully compatible with the rest of the website.

I'm not completely set on this as an answer, since there still will be an issue of spoiling things. If you have better ideas, concerns, etc feel free to comment and we can work on something together.

Are u gonna make a different page for them or are u gonna put them on the same page as the OG protagonist?

Should we combine the two articles together, like Kensuke and Kagi-P, or keep them separate for near end-game spoiler reasons?